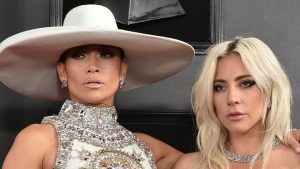 Lady Gaga and Jennifer Lopez are to perform at the inauguration ceremony for incoming US President Joe Biden.

Lady Gaga campaigned for Mr Biden during the election, appearing with him on the eve of the presidential election last November.

She will sing the national anthem at the ceremony on 20 January. Lopez, who also endorsed Mr Biden last year, will give a separate musical performance.

After the ceremony, Tom Hanks will host a star-studded televised special.

Titled Celebrating America, the 90-minute prime-time programme will also feature US musicians Jon Bon Jovi, Demi Lovato, Justin Timberlake and Ant Clemons, and will be broadcast live by ABC, CBS, CNN, NBC and MSNBC.
Mr Biden’s inaugural committee said it would “celebrate the beginning of a new national journey toward an America united” and “showcase the American people’s resilience, heroism, and unified commitment to coming together as a nation to heal and rebuild”.

Lady Gaga also appeared with Mr Biden in 2016 during his It’s on Us campaign to combat campus sexual assault, while Lopez took part in a virtual chat with him in October.

When Mr Biden is sworn in, Washington DC will still be under a state of emergency after a mob stormed the Capitol on 6 January. More than 10,000 National Guard troops will be in the city, with about 5,000 more on standby.

Otherwise, the ceremony’s attendance will be “extremely limited” in line with social distancing due to the coronavirus pandemic, according to the Biden team, which has urged Americans to avoid travelling to the capital.

Donald Trump will avoid it after disputing the election result, becoming the first president to skip the inauguration of his successor since 1869.

Who has performed at past inaugurations? 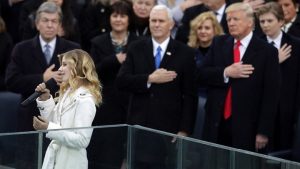 When Donald Trump was sworn in four years ago, 16-year-old former American Idol contestant Jackie Evancho sang the national anthem, while country stars Toby Keith and Lee Greenwood, and rock band 3 Doors Down were among the attractions at a special concert the night before.

Barack Obama called on Beyoncé to deliver the anthem when he saw in his second term in 2013 (although she later admitted miming), and James Taylor also performed.

Four years earlier, the Star-Spangled Banner was performed by The United States Navy Band Sea Chanters, while Aretha Franklin sang My Country, ‘Tis of Thee (which, confusingly, uses the same tune as the UK’s national anthem).

Before that, George W Bush enlisted military personnel to sing the US anthem at his two inauguration ceremonies, while Bill Clinton had Santita Jackson, the daughter of the Rev Jesse Jackson, and opera singer Marilyn Horne. 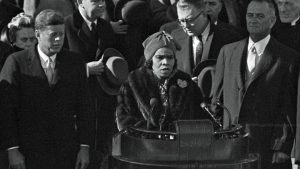