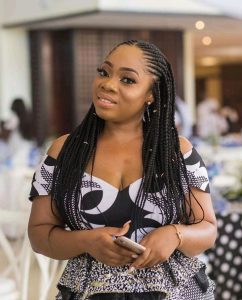 Repented sinner, Moesha Boduong, has made a U-turn on her advice to the youth, typically on dating married men for economic purposes.

Recall in her famous 2018 CNN interview with Christiane Amanpour, she opined that dating married men for finance is a survival recipe, rather than a sin, considering Ghana’s failing economy.

However, following her invitation to Christianity, and her newfound faith in God, she has eaten back her words and has apologised to her mentees for leading them to the path of destruction.

In a latest tete-a-tete with a blogger, she cautioned her followers to be wary of married men who have sexual pleasures with women for their spiritual gratification.

She described some of the men as physically appealing, tie-wearing men who indulge in evil deeds behind closed doors.

“…some of these girls go and they die because of the wrong men they sleep with. You know these men they take our glory. God created us and he has given all of us wealth and power, but these men sleep with us and take away our glory and give us peanuts

“God had blessed us, see our beauty; big buttocks and breast and all that, but the devil uses these men to destroy your destiny. Sleeping with men doesn’t give you genuine riches. That’s why you realise that you get money to open businesses, but it doesn’t succeed because of the men who you sleep with for the money.”

Rather, the actress advised her fellows to work hard to unearth the full potentials and wealth God has already granted them.