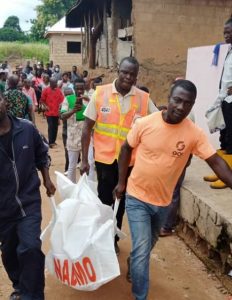 A mother and her baby have died after a building collapsed on them at Akrobi Old Town in the Wenchi Municipality of the Bono Region.

The 31-year-old Ama Mary and her one-year-old son were trapped under their collapsed home in the early hours of Monday, July 12.

The husband of the deceased, Kwabena Badara Fiagra, speaking on the incident, said he had left home to search for foodstuff for the day’s meal, and upon return met the disaster.

She said she had strapped her baby at her back while cleaning the house, same position they lay after the accident.

Mr Fiagra blamed the incident on the bad state of the building, adding that they had already planned to move into another apartment.

Meanwhile, a National Disaster Management Organisation (NADMO) officer and coordinator for Akrobi Zone, Abudu Mohammed, said he had warned the landlord of the dilapidated state of the building, but his advice was not heeded.

Together with the Assembly Member, Winston Gyan and the NADMO Officials, their bodies were retrieved from the debris and deposited at Wenchi Methodist Hospital mortuary.