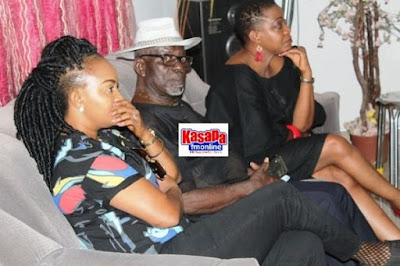 MK Content, Africa’s premiere casting agency, on February 16 officially called on the family of late dancehall singer Ebony Reigns, to express their condolences to the bereaved family.The firm which manages popular Ghanaian actors, Nana Ama McBrown, Fred Amugi and Akorfa Edjeani Asiedu was received by family members of the late dancehall diva.The group led by the Chief Executive Officer, Mawuko Kuadzi, expressed their regret at the untimely death of the talented musician.Other rising actors who were part of the group were Solomon Fixon-Owoo, Evelyn Modzaka and Rosemond Brown.The ‘Maame Hwe’ crooner would have turned twenty-one (21) years today, February 16, 2018 if not for her untimely death.The Dancehall songstress Ebony Reigns (Priscilla Opoku-Kwarteng) was involved in a gory accident on the Kumasi – Sunyani road on 8th February, 2018 when she was returning from Sunyani in the Brong Ahafo Region.The Jeep vehicle in which she was travelling, crashed into a VIP bus leading to her death with two other occupants (Franky Kuri and Francis Astu), her young lady and a Soldier who’s said to be her bodyguard.