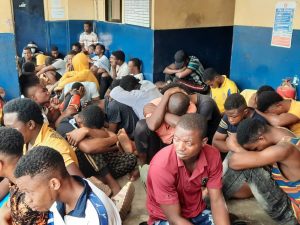 The Police in the Central region Thursday dawn arrested over 340 suspected Criminals at Kasoa and its environs.

Those arrested included both women and men who were suspected to be criminals and prostitutes operating in the area.

Police retrieved substance suspected to be marijuana, weapons and over 200 motorbikes.

According to the police, they will screen and send the criminals to court after necessary investigations have been conducted.

Addressing the media, the Central Regional Police Commander, DCOP Habiba Twumasi said, they carried the swoop to rid the city of criminal activities.

According to her, Kasoa has been in the news negatively as armed robbery, assault on Police and residents, stealing, murdering and many bad incidents have been on the rise.

“As a Police Commander, I won’t sit down for such bad deeds to happen in my Region and I am warning all the Criminals in the Central Region to wait for us for we are coming to descend on them as we have started in Kasoa and its enclaves.”

The Operation dubbed OPERATION STORM KASOA according to the police is part of their efforts to clamp down on criminals in the area.

The majority of the suspects arrested were Nigerians.