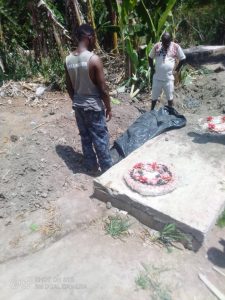 The police in Seikwa are currently in hot waters after a family alleges that some officers of the outfit have brutalized their kin who was in their custody to death.

The family also allege that the said officers went of their way to bury the suspect who died in their custody without a permit. The deceased is a 48-year-old farmer called Abu Bukari Bahala who was detained for allegedly vandalizing a bank manager’s windscreen.

The family said during one of their visits, they were informed that the police had allegedly beaten up the suspect to death and secretly buried him. 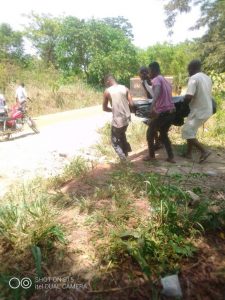 Upon the tip-off, the family said they requested the police to exhume the body which they have since done.

The body of the deceased was said to have been covered in a black polythene before it was buried.

This was after the youth of the town stormed at the police station to demand for their family member.

A family member of the deceased, Mr Abdul Raman, had served notice through Adom News that they were going to ensure that the issue is dealt with to its logical conclusion.

Raman described the alleged conduct of the police as “barbaric and unacceptable”.

He appealed to the IGP, national security, government, and President Akufo-Addo to bring justice to their family.

Currently, the police have deposited the corpse in the mortuary awaiting further information and investigations.

When the Bono Regional Police Crime Officer, Chief Supt Adusei-Poku was contacted, he confirmed the happening had come to their attention.

He said the Regional Police CID said their preliminary checks show that a chief was involved in getting the deceased buried even though he did not name the said chief as the case was still under investigation.

He said a team of investigators who were dispatched to the scene have returned with the report that the suspect had been manhandled by those who arrested him before hadling him over to police.

Supt. Adusei-Poku said his outfit considers the happening as a big one and were going to ensure that they see the matter to its conclusion.