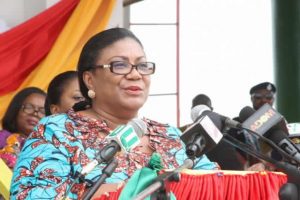 The First Lady, Rebecca Akufo-Addo, has fulfilled her promise to refund an amount of GH¢899,097.84 paid to her as allowance from the year 2017 to date.

This was confirmed in a letter signed by Mrs Shirley Laryea at the Office of the First Lady and addressed to the Chief of Staff, Frema Osei Opare.

“I am directed to forward, herewith, a consolidated Bank Ghana Limited cheque number 000002 for an amount of GH¢899,097.84 (Eight hundred and ninety-nine thousand ninety-seven Ghana cedis eighty-four pesewas), being the full refund for monies received from 7th January 2017 to date, as allowances given to her Excellency the First Lady of the Republic,” part of the letter read.

It added: “Her Excellency the First Lady of the Republic is refunding the amount stated above and also takes the opportunity to decline any allowance to be paid to her in the future.”

This comes barely 48 hours after Mrs Akufo-Addo made public her decision following the controversies generated over recommendations by the Prof Yaa Ntiamoa-Baidu-led Presidential Committee on Emoluments for Article 71 officeholders.

The First Lady described some of the reactions as distasteful and seeking to portray her as “a venal, self-serving and self-centered woman” who is insensitive to the plight of Ghanaians.

Read the full statement below: 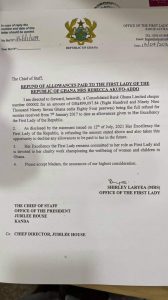