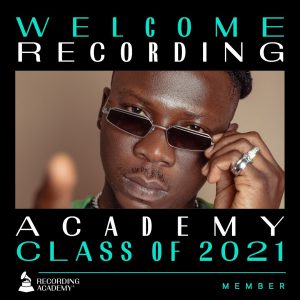 Dancehall artiste Stonebwoy has taken to Twitter to announce his inclusion to the member class of the Recording Academy, organisers of the Grammy Awards.

In a post on the company’s website, the organisation stated that it had reached out to over 2,700 individuals in the music industry worldwide to join its membership list.

Members, who are selected, will get to champion the causes dear to their heart, and that of other stakeholders in the music industry. Additionally, they’ll also get to suggest changes to the rules of the academy. Stonebwoy, who was more than elated, took to Twitter to announce his inclusion in the member class.

He wrote: As part of the new @RecordingAcad member class, I’m honored to have an opportunity to celebrate, represent, and give back to music and its creators. #WeAreMusic.