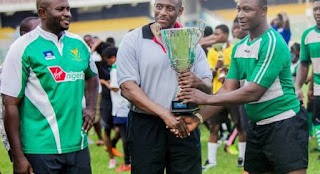 The Ghana Rugby Football Union (GRFU) Board has approved the appointment of Ernest Hanson as a Board Member on Monday, 19 February 2018.Hanson joins the Board with over 20 years experience in playing rugby.He played schoolboy rugby at Clifton College in the UK and three more years at Gloucester Rugby Academy until the age of 21.Mr Herbert Mensah, President and Board Chairman of Ghana Rugby, spearheaded the appointment of Hanson who had previously served on the Board of the GRFU.According to Mensah, Ghana Rugby adopted a new Constitution in 2017 that for the first time in 17 years allowed the Board to appoint Directors in addition to those elected by the Union’s General Meeting.“The appointment of Ernest Hanson is the first step in a vision I had since taking over as President in 2014,” Mensah said.Herbert Mensah further stated, “Rugby, as most sporting disciplines, is a business that requires exceptional challenges regarding governance and it is essential to bring resources with a business background into the fold to assist with biggest challenge we face, namely to place the Union on a sustainable funding platform.”Hanson is currently the MD of Beaufort Properties, a Ghana-based real estate firm. He is passionate about the growth of the game in Ghana and wants others to experience the personal growth and development that comes from playing the sport.He is also a Level 1 World Rugby Coach and has also played senior rugby for London Nigerians RFC.Ghana Rugby has a challenging year ahead with three international tournaments planned for May, September and October.The international circuit kicks off in May when Ghana will be hosting the Rugby Africa Bronze Cup against Lesotho, Mauritius and Rwanda. A win in this competition will see Ghana’s promotion to the Silver Cup and a step closer to Mensah’s mission to take Ghana Rugby to the World Cup.In September Ghana Rugby plans to organise a Ghana International Sevens tournament against seven other Rugby playing Unions in preparation of the scheduled Rugby Africa Men’s Sevens Tournament in October.Mr Ernest Hanson (left) with the President and Board Chairman of Ghana Rugby, Mr Herbert Mensah, at the finals of the 2017/18 Ghana Rugby Club Championship.