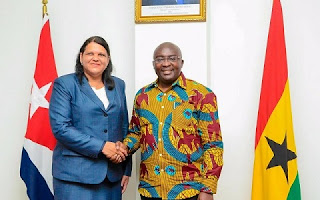 Vice President Dr Mahamudu Bawumia has assured the public about government’s resolve to curb malaria.Dr Bawumia, who received a Cuban government delegation, led by Mrs Mercedes Lopez Acea, Vice President of the Council of State of Cuba, at the Flagstaff House, Accra on Monday, February 12, 2018 reiterated “government’s desire to eradicate malaria and other mosquito-transmitted diseases which lead to significant numbers of deaths in Ghana and costs Africa billions of dollars in lost productivity”.Mrs Acea on her part commended Ghana’s leading role in ensuring peace and stability in the West Africa subregion, and called on officials of the two countries to expand and deepen areas of cooperation for mutual benefit.