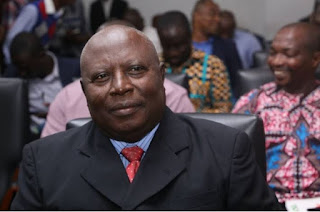 A former Deputy Attorney-General, Dr. Dominic Ayine, has said his lawsuit challenging the nomination of Martin Amidu for the position of Special Prosecutor is not influenced by fear of prosecution as suggested.Speaking on Eyewitness News, Dr. Ayine, an appointee in the Mahama government, said such insinuations were without basis because prosecutorial powers were not limited to just the Special Prosecutor.He also said the fact Mr. Amidu is a member of the National Democratic Congress (NDC) does not give the man, nicknamed the citizen vigilante, some kind of edge.“…The reason is simply that it is not only Martin Amidu who can prosecute us. There are countless human beings that his excellency Nana Akufo Addo can appoint to prosecute us… The fact that he is a member of the party does not make him a repository of information about the dealings of our ministers and appointees. So it is pointless for anybody to start to think that we are afraid of him because he is coming from inside,” Dr. Ayine explained.Aside from this, Dr. Ayine said the idea of Mr. Amidu as the Special Prosecutor was just over-hyped unnecessarily.“…so why should we be afraid of Martin Amidu or any other person coming to be Special Prosecutor. This whole thing is over-hyped and that this whole thing about the fear of Amidu is not something we should be dwelling on.”“We should be dwelling on whether or not there is a strong commitment on the part of all of us as country to fight the canker of corruption, not about individuals who we think will work the magic. I don’t think any magic is going to be worked just because some individual has been appointed,” Dr. Ayine added.Dr. Ayine’s lawsuit contends that Mr. Amidu, being 66 years of age, is too old to hold public office, under which the Special Prosecutor’s position falls.The defendants in the suit are the Attorney General, Gloria Akuffo, and Mr. Martin Amidu, the nominee himself.Dr. Ayine is seeking a declaration that, via the interpretation of Articles 190(1)(d), 199(1), 199(4), and 295 of the 1992 Constitution, that retirement age of all holders of public office created pursuant to Article(1)(d) is 60 years, thus Mr. Amidu is not qualified or eligible to be nominated as the Special Prosecutor.”