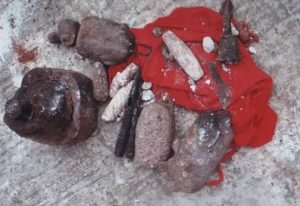 Born again Christian, Joshua Koku Makafui, has shared his life’s journey and what caused him to resort to black magic (juju).

To begin, Mr Koku advised the youth to work hard and not believe in the flashy lifestyles of others.

According to him, he has had to do hard drugs and alcohol at a very tender age.

“I was about 13 years old and he would always give me chocolate when we came from smoking ‘weed’ to keep me quiet,” he narrated.

This was years after he had started drinking alcohol through friends’ influence.

After quitting several jobs, he was living life as an alcoholic and drug addict. This is where his mother sent him to work with an uncle as a clearing agent and that is where he began worshipping ’voodoo.’

“I saw a lot of young men at the place living lavish lifestyles so I became inquisitive and asked how they did it. They told me that they visited shrines to support their businesses. I started visiting the shrines with them but it was not working so eventually I decided to bring the voodoo to my house to worship it myself. After all this, I never benefited from it the way I wanted,” he revealed.

As a born-again Christian, he has tried to win his friends over and get them closer to God.

In the course of the interview, he gave a detailed account of how he became a Christian.