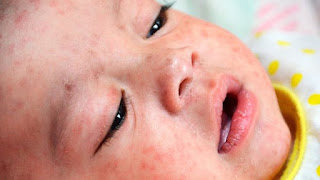 Europe has seen a massive surge in measles cases in 2017, which the World Health Organization says is a tragedy after a record low of 5,273 cases in 2016.
Cases increased by 400%, with more than 20,000 people affected and 35 deaths.
Fifteen European region countries, including the UK, had large outbreaks. Measles cases were highest in Romania, Italy and Ukraine.
People shunning vaccination is part of the problem, say experts.
Although research published in 2004 about a possible link between the MMR vaccine and autism has been discredited, the scare it created damaged some people’s trust of the vaccine.
Measles is a highly infectious viral illness that can be deadly.
The MMR vaccine can prevent it.
The WHO says there have been declines in overall routine immunisation coverage, as well as consistently low coverage among some marginalised groups and interruptions in vaccine supply or underperforming disease surveillance systems.
Dr Zsuzsanna Jakab, from the WHO, said: “Every new person affected by measles in Europe reminds us that unvaccinated children and adults, regardless of where they live, remain at risk of catching the disease and spreading it to others who may not be able to get vaccinated.
“This short-term setback cannot deter us from our commitment to be the generation that frees our children from these diseases once and for all.”
The UK saw 282 cases in 2017, linked to the continuing outbreak in Europe.
The UK recently achieved WHO measles elimination status, meaning that for the past few years the number of cases has been low enough to stop the disease circulating around the country.
The overall risk of measles to the UK population is low, but due to ongoing measles outbreaks in Europe, cases in unimmunised individuals and limited onward spread can occur.
A few weeks ago, Public Health England warned about measles cases in several regions of England.
At the end of January 2018, there were 51 confirmed cases in the West Midlands.
The vaccine is given as two doses to very young children as part of the NHS childhood vaccination programme.
Adults and older children can be vaccinated at any age if they haven’t been fully immunised before.
Measles symptoms include a runny nose, sneezing and cough, sore, red eyes, a high temperature and, after a few days, a red-brown blotchy rash.

Measles cases across Europe in 2017