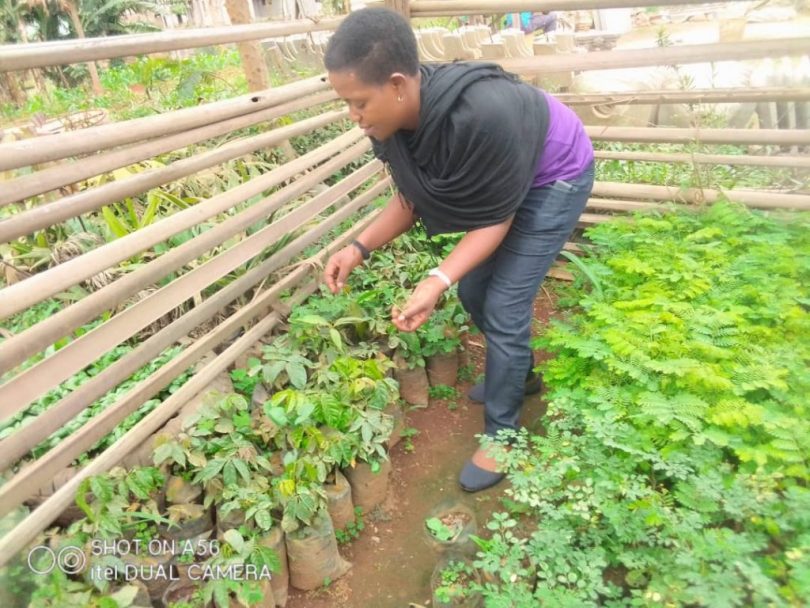 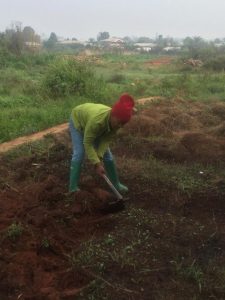 Before becoming an organic farmer, Munyuy Mercy Vernyuy had eleven years of experience working as a journalist.

Though she did not have higher education in journalism, she is gifted with skills and a beautiful voice that appeals to radio and TV. “I started journalism in a community radio station in 2009 as a volunteer without training. I had just left college and was unable to continue my education.”

Munyuy left Government Bilingual High School in Kumbo in 2007 due to financial constraints.

Her parents were unable to pay her fees in her desired college, so she had to stay home for a year to sell fruits and volunteer as a home teacher to raise money and go back.

Munyuy eventually went back in 2010 to obtain her Advanced Level Certificate.

“I studied English, French and history as an added subject,” she said.

Munyuy says her life was full of challenges such that she couldn’t make any headway in her educational career.

In 2014, she entered Impact Polytechnique in Kumbo to study Journalism and Media but once again could not continue after her Higher National Diploma due to lack of funds and the insurgency of the Anglophone Crisis in Cameroon which caused her to relocate. 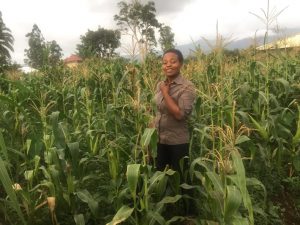 She started working as Journalist at a community radio Kumbo as a volunteer. Munyuy had just left college then.

She was with Bui Community radio for three years.

Munyuy also worked for Radio Evangelium in Kumbo for six years, Dream FM⁩ at Yaounde for a year and then TV Presenter for the Holiday Jamboree and Talent Show program at the most-watched TV station in Cameroon, Canal2 English.

She also volunteered as a peace journalist reporter for Christian Broadcasting Services (CBS radio) in Bamenda.

While working for the radio stations among others, she decided to instead to assist her three siblings in school.

Now, her immediate younger sister has a degree in management and the younger brother is a trained environmentalist and agroforestry technician. 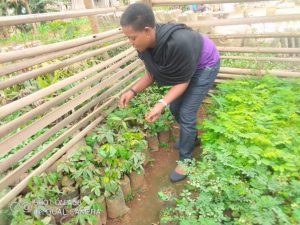 When the ongoing crisis in Cameroon started in 2016, journalism became extremely challenging for Munyuy.

She says her life and that of her colleagues were in danger so Munyuy called it a quit.

“My Life as a journalist was at risk as I watched my colleagues being killed, others were abducted/ kidnapped and some taken to prison.”

In 2018, she decided to switch to another field in the customer service sector. Unfortunately, she had an accident on December 19, 2018, that kept her home for nearly a year.

Munyuy had three different fractures on her right leg hip, bruises on the left leg, and other body parts, including head injuries.

“It even affected me in a way that I lost part of a sense of recognizing people. I was unable to recognise or remember a lot of places and names,” she said.

The 31-year-old says while she was recovering, she got more healing from nature since she could barely walk.

“This is what attracted me to go into agriculture. My love for environmental protection motivated me to start volunteering with organisations that promote environmental sustainability.

“I got more inspired to protect the environment and to engage in organic agriculture precisely. I was saddened seeing people fall sick because of ignorance of the chemical composition of the synthetic fertilized food they were eating. So I decided to Chose to farm God’s way.”

After two years of voluntary work with four different organisations and individual farmers. she was able to gather enough inspiration to start her farm.

Munyuy began with 400 tree seedlings and 10 square meter garden beds. Munyuy says she has more than one thousand trees in her nursery.

Though Munyuy’s garden is still under construction, she will be supplying organic vegetables on a small scale before the start of the dry season in November.

She has invested close to $100 in vegetables and makes about $250. Her first sale of avocado seedlings was about $250

Munyuy says she started her farm business by picking things around to sell ( pear seed, lemon seed from rotten leman, pepper seed all from the rubbish cans).

“I just picked things around and eventually I was able to sell and make some money.”

Munyuy told myjoyonline.com in a chat that, it is quite easy for people to succeed when they discover their passion and build around it.

“You can be successful if you already know your passion. It works for me so it can work for others.”