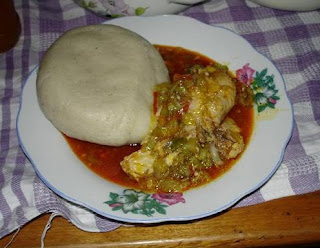 An eight-year-old girl is ‘okay’ after eating suspected contaminated local delicacy ‘Akple’ which has wiped out six others at Akakpokope, a village in the South Tongu District of the Volta Region.The girl is one of two who remain alive after eight people, last Thursday, are believed to have consumed the food prepared with corn flour.She has been discharged and is walking about as two families are left mourning their fatal losses.The other remaining survivor is the corm mill operator who processed the corn flour for sale. A second family who also bought the corn flour has recorded fatalities.The corn mill operator remains in very critical condition, Joy News Maxwell Agbagba has reported. His corn dough was used by his wife to prepare the ‘Akple’ and Okro soup last week. His wife died on Sunday. Their two daughters died Monday morning at a district hospital in Sogakope.The food was consumed on Thursday, hospitalizations began on Friday, the deaths began on Sunday.The eight-year-old girl belongs to the second family which also purchased the flour. That family has also lost three members.The deceased persons as at Monday are Peace Akapko, 35; Elias Akakpo, 14; Comfort Aryee, 40 and Patience Kwaovi, 10. Two other names are yet to be confirmed.Samples of the food have been sent to the Noguchi Memorial Institute for Medical Research (NMIMR) in Accra for testing.