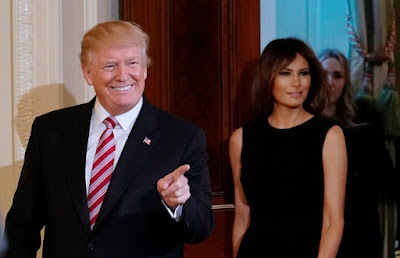 Over a third of Americans think First Lady Melania Trump should leave President Donald Trump, following claims of an alleged affair with porn star Stormy Daniels in January.
A Marist poll published Wednesday—on Valentine’s Day, no less—found that 34 percent of Americans think Melania should end her 13-year marriage to the president. The couple have an 11-year-old son together, Barron.
But, in case the first lady was seeking public opinion on the state of her marriage, a larger contingency of Americans think the Trumps should stay together. 23 percent were unsure what the first lady should do.
In January, the Wall Street Journal reported that Trump’s personal lawyer Michael Cohen paid adult film actor Daniels —real name Stephanie Clifford—$130,000 to buy her silence about an alleged affair with the president back in 2006. This week, Cohen claimed the money was paid out of his own pocket and was not related to Trump.
Daniels met Trump at a celebrity golfing tournament in Lake Tahoe, Nevada, in July 2006. There, it’s claimed, they had sex at a hotel and began an affair.