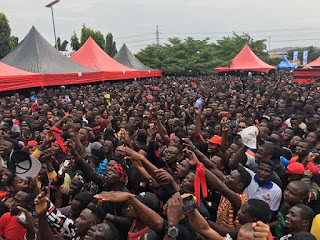 Thousands of fans and supporters of late Dancehall artiste, Ebony Reigns, thronged the St Martin De Porres School at Dansoman in Accra to mourn the late musician during her one -week memorial on Sunday, February 18.The forecourts of the school, as well as the stretch of road outside the premises, got flooded with fans, many of who could not hold back their tears following the passing of the star.The day-long event saw celebrities from Ghana’s music and movie industries extend their tributes to the family of the artiste amidst tears and tributes.But not everyone within the mammoth crowd was there to mourn. Some criminals infiltrated the milling crowd and robbed unsuspecting persons of their belongings including monies and mobile phones.The crowd was so thick that free movement was practically impossible, a situation that created a perfect condition for the thieves to have a field day engaging in a stealing spree, as Police presence was not enough to deter the criminals.“I’ve come here to mourn this great musician who was so talented, but little did I know that I’ll leave here feeling sadder as my iphone 10 which I so much cherish has been stolen. I didn’t feel anyone touching my bag, but I was shocked when I realized that my phone had vanished from my bag. Perhaps I should have stayed home and watch the event on TV rather than coming here. I’m beginning to have regrets of attending the event as that phone is very expensive,” Jacinta told Kasapafmonline.com.Another victim, Derby, told this website that she also had her monies and mobile phone stolen under circumstances that continue to baffle her.“I was very careful not to lose any belonging but conscious as I was, my handbag was stolen which contained GHC 700 and my Samsung mobile phone. I’ve heard others also complaining of their personal effects being stolen. The crowd was so massive, there should have been policemen planted in the teeming crowd to avert such petty stealing. This is just the one week celebration of Ebony’s passing and look at how thieves are having a field day. I wonder what will happen during her funeral proper.”Ebony Reigns will be buried on March 17, 2018, in Accra.Ebony died along with her friend Franki Kuri and Francis Atsu Vondee her bodyguard in a tragic accident that occurred on 8th February 2018, while returning from the Brong-Ahafo Region where she’d gone to visit her mother who had returned from Abroad.