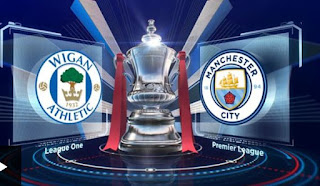 Wigan Athletic ended Manchester City’s hopes of a clean sweep of trophies with a stunning upset in their FA Cup fifth-round tie.The League One side survived virtually constant pressure from the Premier League leaders, eventually capitalising on Fabian Delph’s controversial first-half red card when Will Grigg struck 11 minutes from time.The striker’s low finish capped a night of drama at the DW Stadium, with City’s Fernandinho wasting a fine chance shortly before Delph was dismissed for a heavy challenge on Max Power.The incident led to a heated argument between City boss Pep Guardiola and opposite number Paul Cook in the tunnel at half-time.And there were unedifying scenes at full-time, too, with City striker Sergio Aguero involved in an altercation with one of the many home fans who invaded the pitch.City threw everything at their hosts both before and after Grigg’s goal – a guided shot from 20 yards – and Danilo’s header was gratefully held by Christian Walton in the game’s final attack.Spirit of 2013 lives onThe full-time whistle sparked scenes of celebration from the home fans. City supporters, in contrast, were visibly angered – and objects were thrown onto the pitch from the away end once the players had departed.That could not tarnish Wigan’s night, though, as they beat City in this competition for the third time in six seasons.The Latics may have been relegated twice since beating the Blues in the 2013 final at Wembley, but they remain something of a bogey side for them.City had 83% of possession and spent long spells in the Wigan half, with home right-back Nathan Byrne producing a standout performance as the visitors regularly raided down the left.Chey Dunkley made 13 clearances – more than the entire City team – while his fellow centre-back Dan Burn marshalled the defensive unit superbly.Grigg’s task as a lone striker appeared thankless as he touched the ball less than any player who completed 90 minutes.But one of those 19 touches will live long in the memory – his placed finished past Claudio Bravo.City’s defeat means three Premier League sides have been knocked out of this year’s FA Cup at the DW Stadium.Another – Southampton – visit in the next round next on the weekend of 17-18 March. Mauricio Pellegrino’s men will be fully aware the spirit which carried Wigan all the way to victory at Wembley five years ago lives on.Red confusion prompts half-time chaosGuardiola, who said his side “gave absolutely everything”, refused to comment in detail about the red card, and his subsequent clash with Cook.The dismissal did not change the flow of the game, as City dominated even with a numerical disadvantage, but the decision prompted a half-time reshuffle with Leroy Sane replaced by Kyle Walker.Delph seemed stunned to be shown the second red card of his career, after sliding in for a 50-50 ball. The challenge was robust but did not appear malicious and he will now miss Sunday’s League Cup final against Arsenal.Referee Anthony Taylor took his yellow card out and began writing on it, before pulling out the red card.Cook’s angry gesticulations after the tackle appeared to irritate Guardiola, and the pair continued a heated debate in the tunnel, with staff from both sides attempting to keep things under control.Match of the Day pundit Jermaine Jenas said the decision was “strange”, adding: “I really don’t think the tackle was that strong. I feel he won enough of the ball, it wasn’t two-footed.”City may well feel aggrieved, but they found the target just five times from 27 attempts, as the finishing that has made them England’s highest-scoring team eluded them.Quadruple proves impossibleIt seemed unthinkable that a side boasting nine goals in their past two games – and a 16-point lead at the top of the Premier League – would succumb to just a third defeat in 42 matches.And City’s defeat is perhaps all the more surprising as it arrives during Wigan’s worst run of form this season. Cook’s side came into the fixture having lost back-to-back league games for the first time in the campaign.But their spirit and commitment derailed a City side seen by some as the best of the Premier League era.Talk of an unprecedented Quadruple had intensified in recent weeks, though Guardiola always maintained such an achievement would be “impossible”. He was proved right in spectacular circumstances.This was no hard-fought exit at the hands of a European force, but a shock which will go down in FA Cup folklore.City must make do with chasing a Treble, starting with their Wembley final against the Gunners on Sunday.Man of the match – Will GriggGrigg top of the FA Cup charts – key statsGrigg scored his seventh goal in this season’s FA Cup – more than any other player. His goal came from Wigan’s only shot in the second half.Guardiola’s side failed to score for only the third time this season, with Wolves in the EFL Cup and Crystal Palace in the Premier League also keeping them at bay.City have been knocked out of the FA Cup by a side from the third tier or lower for the first time since the third round in 2004-05 (1-0 v Oldham).Delph’s sending-off was the ninth in all competitions for City under Guardiola – only Watford (10) have had more among Premier League clubs in that time.Wigan overcome ‘severe test’ – manager reactionWigan boss Paul Cook: “It feels great. It’s such a severe test. They’re such a strong side and move the ball so well. We had to ride our luck at times and the sending-off is always a big incident.“Our lads deserve credit for their work. Some of the blocks they made were outstanding and to beat Man City you have to do that.”Manchester City boss Pep Guardiola: “Congratulations for Wigan for the qualification. We did absolutely everything, we made a mistake and this kind of game is like a final. OK, we accept the defeat. Congratulations to the winner.”What next?Manchester City face Arsenal in the League Cup final at Wembley on Sunday (16:30 GMT). Wigan host League One’s bottom club Rochdale on Saturday (15:00).