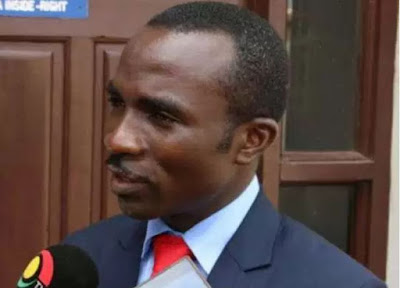 The New Patriotic Party (NPP) Member of Parliament (MP) for Nhyieso in the Ashanti Region, Hon. Kennedy Kankam is up in arms against party’s Disciplinary Committee Chairman in the region, Dr. Richard Amoako-Tuffour challenging his sole decision and authority to sanction members without recourse to the laid down processes.“Who is that Amoako-Tuffour taking a sole decision to sanction people in the party just anyhow”, former Regional Organizer quizzed.“Let me tell him that NPP is a party of rule of law. He cannot sit where he is sitting and think he can sanction people just like that”, the lawmaker fumed during a telephone interview on Kumasi-based Nhyira FM show.Earlier, Dr. Richard Amoako-Tuffour had confirmed on the station his outfit has suspended the Constituency chairman of the party, Mr Joe Card with immediate effect.According to Disciplinary Committee Chairman, he has received a petition from a member of the party against the embattled Constituency Chairman hence, his decision to suspend him.But the Hon. Kennedy KanKam described Dr. Richard Amoako-Tuffour’s decision as undemocratic and alien to the NPP’s Constitution.“This is not what the NPP’s Constitution talks about. …Let Amoako-Tuffour concentrate on his job as Presidential Advisor to President Akufo-Addo”, Hon. Kennedy Kankam, MP for Nhyieso Constituency admonished.