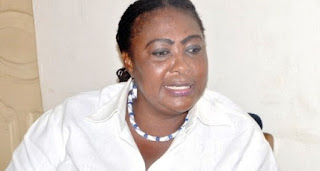 A Deputy Minister for Health, Tina Mensah, has said that striking nurses at the Ankaful Psychiatric Hospital in the Central Region have agreed to return to work, following days of protest against the continuous stay in office of the hospital’s Medical Director.According to her, the nurses took that decision after she had a meeting with them on the matter.She said although she could not give the nurses the assurance that the embattled hospital director, Dr. Eugene Dordoye had been permanently removed from the facility, the staff were appreciative of the goodwill and have decided to return to work with immediate effect.“I spoke wholeheartedly to them and they said they are going back to work. They said they are resuming tonight [Monday night]. They are all going back. They gave me their word,” Tina Mensah said in an interview on Eyewitness News.‘Staff declare strike’The nurses and physician assistants at the Ankaful Psychiatric Hospital on had been on strike since last Thursday in protest against the conduct of the facility’s Medical Director.According to them, Dr. Dordoye’s presence at the facility posed a danger to their mental and physical health. They accused the director of gross disrespect, and this was not the first time the staff had embarked on a strike.In 2017, they declared a strike and threatened to free psychiatric patients if the director was not removed.‘Human relation courses’The embattled Medical Director, Eugene Dordoye, is currently undertaking some courses to improve his interpersonal and human relation skills according to the Mental Health Authority.The Authority had urged the staff to exercise restraint and go back to work, arguing that they will have a legitimate concern if after the courses, Dr. Dordoye persists with his poor human relations.‘Dordoye not at post’The Health Ministry had earlier asked Dr. Dordoye to temporarily leave his post as the hospital director.Following an emergency meeting on Friday, the Ministry noted that it will soon replace him with a new director in acting capacity.The Public Relations Officer for the Health Ministry, Robert Cudjoe, said “it was at a meeting that this came out. Dr. Dordorye was with us at the meeting and we all agreed that he should give way for another person to act…As time goes on, another person will take over from him,” said Mr. Cudjoe.