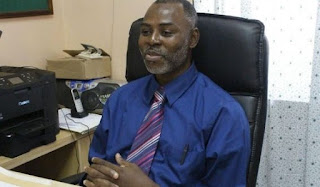 The Ministry of Health has asked the embattled Director of the Ankaful Psychiatric Hospital, Dr. Eugene Dordoye to relinquish his position temporarily.The decision was arrived at after an emergency meeting today [Friday] between the Ministry and the medical director.The nurses and physician assistants at the facility withdrew their services earlier this week, and demanded that Dr. Dordoye’s appointment be terminated, claiming that he disrespects them and so they cannot work with him. Dr. Dordoye will take a management training course which is expected to help him improve his relationship and interactions with the staff at the hospital.In an interview with Citi News, Public Relations Officer for the Health Ministry, Robert Cudjoe, said a new director will take over next week.“It was at a meeting that this came out. Dr. Dordorye was with us at the meeting and we all agreed that he should give way for another person to act…As time goes on, another person will take over from him,” said Mr. Cudjoe.When asked whether Dr.Dordorye will return to head the hospital after the course, Robert Cudjoe said,”it’s possible but the chances of that are very small.”Meeting called offThe Ministry of Health had earlier called off a planned meeting with nurses at the hospital aimed at resolving the impasse.This is because the staff had refused to be part of that meeting.Spokesperson for the staff, Emmanuel Ofori, had told Citi News earlier that “if the minister has intentions of removing him, he doesn’t need us in Accra before doing that. When we went there the other time, certain comments he passed really put us off. That is why we didn’t want to go there”“Does the Minister need us to sign that the hospital director has been transferred or reshuffled or relieved of his post? He doesn’t need that”, Mr. Ofori said in an earlier post.Staff get their wayThe news of Dr. Dordoye’s removal, although temporary, will be welcomed by the staff of the hospital who had claimed that his presence at the facility posed a danger to their mental and physical health.Among other things, they had accused him of putting them through emotional and psychological stress.Aside from withdrawing their services at the facility, the nurses had also threatened to release the patients at the hospital if their demands were not met. This was the second time they had embarked on a strike.The staff are now expected to resume work. The Mental Health Authority had earlier stated that the medical doctor was going to undertake a three to four months course to improve on his human relations with the workers.