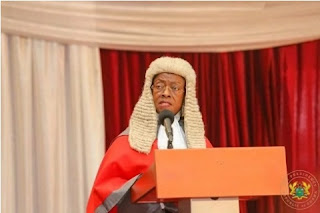 Chief Justice, Sophia Akuffo and esteemed Justices of the Supreme Court have condemned Prof. Raymond Atuguba’s research seeking to establish the political leanings of Supreme court judges.Chief Justice Sophia Akuffo commenting on the research, said that it was alien to Ghana and as such was not suitable for the environment.“It is an American type of research that you have done…that’s fine, but please be careful what you are importing into our environment.“They [Americans] are used to that, we are not. I don’t think there was a single judge who agreed with what you were saying,” she said.Prof Atuguba, on Thursday, presented a research at the 2018 GIMPA Law Conference which sought to establish that the voting pattern of judges of the Supreme Court was influenced by the political party that appointed them.He explained that he analyzed one hundred political cases in Ghana and found that the voting patterns of the justices favoured the parties which appointed them.“It is not a coincidence that this happened…and it will soon be discovered by the general populace and it may be too late then to gain public trust and respect for the court. The time to act is now,” Prof Atuguba urged.His findings, however, infuriated the justices of the Supreme court who were present at the conference.Justice Jones Dotse, who was at the conference sternly disapproved Prof Atuguba’s findings saying that the entire research was an insult to the judges.“You are entitled to your views, but I think it is an insult of the highest order.”, he retorted.