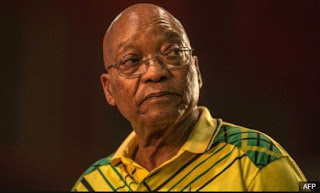 When Obama said that Africa needs strong institutions, at no point was he implying that we need strong institutions to deal with only the weak in society.His recommended institutions are ones that have the capacity to deal with both the privileged and the under-privileged in order to get rid of all cankers we are struggling with.Publicly forcing Jacob Zuma to resign as the President of South Africa is definitely not the right way of hunting out corruption effectively. This approach, I believe is rather encouraging others to aspire to be more corrupt since they will always have the option of resigning and going scot-free regardless of the financial losses they may have caused the state.Elsewhere, people resign from their positions on the dictates of their conscience and subsequently apologize for wrongdoing. Notwithstanding their apologies, they are held before the law if they are found guilty of any of those. From his speech, it is clear that Zuma never resigned because of the heap of allegations against him. Rather, for the sake of peace in South Africa.It is tempting to assume that kicking Zuma out of the presidency is worth it and South Africans must be okay. Yes, politically it is important for the ANC because getting him out will help clean the slate to enable them win the 2019 elections. For me, the longer-term damage of presidents resigning from office with impunity is in my view very much incalculable.No good comes of Zuma’s resignation if there are no laws to deal with him as a private citizen now that he is out of office. Since there is no deterrent to prevent other presidents from following Zuma’s catastrophic example, knowing well that at the end he has gotten everything he wanted including the title, “His Excellency, Former President ………”Cracking down on corruption without any clear intention to hold a resigned Zuma and subsequent presidents who misconduct themselves accountable could suggest that once elected president, one is immune from the law, despite the South African Constitution’s provision that “all are equal before the law”.It is time African countries made laws that can bite hard at presidents who rape the coffers of their states and misconduct themselves. These laws must be accompanied by institutions that will implement them effectively and yield good results for the interest of the public.I agree that presidents and their deputies must be accorded some privileges, but those privileges must not be inclusive of corruption. If they are involved in bribery and corruption, the option must not be the public forcing them to resign. Rather, they must be made to pay the monies they may have stolen to the nation with calculated interests.This will certainly serve as a deterrent to others who aspire to occupy the seat of the presidency.The euphoria among many on the heels of Zuma’s resignation is totally okay. But it is unfortunate to only rejoice over the present without raising our heads up to look at what is ahead. In countries like Brazil and the Republic of Korea, there are laws and effective institutions that hand down criminal inquiries and even prison sentences to deserving presidents and prime ministers who engage in bribery and corruption, abuse of power, coercion and disclosures of confidential information.In South Korea for instance, aside the immediate past president who has been made to face the laws after her impeachment, two other former leaders, Chun Doo-hwan and his successor, Roh Tae-woo, were charged in the mid-1990s after they left office and it had been legally established that they improperly collected millions of dollars from businesses during their tenures.Going forward, the South African public and the entire African populace must not only be loud in calling for presidents to resign but must also be insistent on the enactment of laws and the establishment of strong institutions that will deal with the likes of Zuma who are suspected of misconducts.As a people, we Africans must learn lessons from countries like Brazil, South Korea and others that have systems in place to deal with top-hierarchies that engage in corrupt practices. Until then, the Zuma exit comes with no important lessons to other corrupt leaders in Africa.