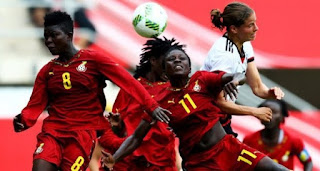 10 years ago, on the 7th of February Ghana (host nation) bowed out of the African Cup of Nations to Cameroon in the semis.You could hear a pin drop in Accra and and by extension, the whole country as the Cameroonians advanced to the final of the 2008 Afcon.The dream of a ‘host and win’ was shattered and the then 26-year wait for a title counting. The count is still on.In November this year, Ghana will host the entire of Africa again but this time, for the Women’s Afcon known as the Awcon.It will be the first time the West African country is hosting the women’s football tournament. The agenda of a ‘host-and-win’ is clearly on the mind of all and sundry.In Africa, Ghana is a powerhouse when it comes to Women’s football ranking and the general belief is that the nation is the 2nd best on the continent. They are only bettered by their huge nemesis Nigeria to whom they lost in three Women’s AFCON finals (1998,2002 and 2006).The Black Queens are yet to win the AWCON trophy but they can count on the history that favours host nations.Nigeria’s success in 1991, 1995, 1998, 2002, and 2006 all came at home while Equatorial Guinea’s two titles in 2008 and 2012 were won before their home crowd.That should serve as enough inspiration to the Black Queens later this year but that will be challenging looking at the context of the women’s game in Africa.Women’s football is run a bit differently on the continent as compared to the men’s game.The system of a women’s league is now gaining grounds in Africa and international friendlies aren’t frequent or sometimes non-existent.The road to a first Afcon title for Ghana will prove a tough nut to crack with teams like Nigeria,Cameroon all posing a threat to Ghana’s goal.However, the Wafu tournament will be a silver lining for the Black Queens since it offers a nearly foolproof way of gauging the team’s level.The 2018 Wafu Zone B tournament assures Ghana of at least three matches.As a host nation, Ghana will not be playing in the qualifiers hence it gives the Black Queens technical team led by a former Black Queens player Mercy Tagoe Quarcoo a chance to assess the team’s weaknesses and strengths.The competitive nature and physical toughness from some of the teams will give the technical handlers a fair idea of where the team ahead of the AWCON tournament in November.In Group A, Ghana will be playing against the host nation Ivory Coast.The Ivorians made it to the last World Cup in 2015 and were actually the only African team to move past the group stages.Although Burkina Faso and Niger may not be considered as power houses in women’s soccer the physical and athletic nature of these teams would be a great test for the Black Queens.The possibility of facing Nigeria,is probably one great aspect of the tournament for the Black Queens.Nigeria’s new coach Tomas Dennerby has downplayed the expectations from Super Falcons.However a Ghana-Nigeria tie is all sorts of tantalizing on any day and should the clash happen it could give an opportunity for Ghana to identify dennerby’s tactical position.Although the Swedish Coach opted for a youthful squad with the absence of star names like Asisat Oshoala and Esther Sunday, the encounter will still prove useful for the Black Queens in November when the Awcon tournament kicks off.There is a new technical team in place for the Black Queens following a reshuffle in 2017.The Wafu tournament gives the technical team the chance to gel and start preparations from scratch.The departure of Didi Dramani as head coach means Mercy Tagoe Quarcoo will be the interim coach for the Queens.The team’s performance at the regional competition if great could be a persuasive factor for her to get the jobs for keeps.The 2018 Wafu Zone B tournament, which is an inaugural edition, provides the team a good stepping stone for Ghana’s host and win ambitions for the 2018 AWCON.They better take it.