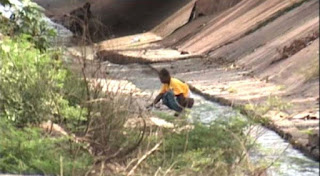 Sanitation is critical to the total health well being of every community.Due to its importance, it features as goal six of the Sustainable Development Goals (SDGs) which states: “ensure availability and sustainable management of water and sanitation for all”In spite of its importance, sanitation in Bugubelle, a community in the Sissala East of the Upper West Region leaves much to be desired.One of the aspects of the poor sanitation situation in Bugubelle is open defaecation.Sadly, the indigenes don’t have an idea how dangerous this act is to their health.According to the Assemblyman, out of the more than five hundred households in the community only a handful of these households have a pit latrine.He narrated that, latrines that Plan Ghana, a non-governmental organisation supported to be built were in households of opinion leaders of the community. These latrines have deteriorated and most of the indigenes practice open defaecation.In addition to this effort, there’re only two public toilets in the community: for the basic school and another built close to the market; unfortunately, due to poor maintenance culture, the facility close to the market is nothing to write home about – the facility has human excreta littered in front of it, the slabs that covered the holes are broken and refuse dumped around the whole place.According to a native, there was initially a committee that was set up to see to the maintenance of the facility but unfortunately the committee has been dissolved for reasons unknown.The Assemblyman revealed that a couple of months ago, the District Assembly requested that the community provide one person to be trained in building household latrines in the community.The Assemblyman stated that, the trainee has reported to him that the indigenes have started showing interest in owning household latrines after an initial lack of interest in the idea.Although such interest has been shown in owning household latrines, there’s the need for consistent and persuasive sanitation education in the community.Taking the indigenes of Bugubelle through the importance, health and social benefits of owning household latrines will ensure that the act of open defaecation will be a thing of the past.Also, it will make the indigenes to take the initiative of constructing their own household latrines without waiting for the District Assembly or a non-governmental organisation to solve their challenges for them. That is development.It will give the indigenes the understanding of taking charge of issues on sanitation management in the community since they are already aware of selecting group of persons who will see to the management of various aspects of their lives. Sanitation education for the indigenes of Bugubelle will bring an end to open defaecation in the community, and the community loses only the indignity and the diseases that accompany poor sanitation in our communities. Sanitation education is important to all.It borders on health, and health is wealth.